Number of People Moving to Irvine CA Continues to Grow

If you are moving to Irvine CA, or you have in the last five years, you are certainly not alone. Between 2010 and 2015, Irvine's population increased over 21%, giving the Orange County city the highest percentage increase in resident population among all California cities during that five-year period. Irvine also ranked 7th in the nation. The ranking was based on recently released census data for cities with a population of 50,000 or more by 2010.

Only 10 other California cities were among the country's top 100 ranked, including Lake Elsinore with a 17.3% estimated population increase and Milpitas with a 16.1% increase. 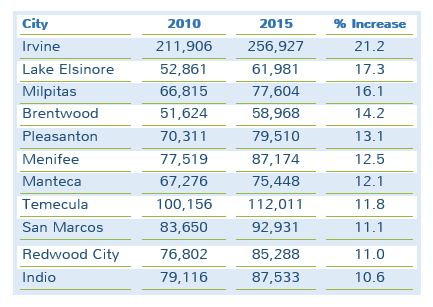 In addition to the five-year ranking, Milpitas, a city in Santa Clara County, also ranked #8 among the nation's fastest growing cities (with a population of 50,000 or more) between July 1, 2014, and July 1, 2015. Dublin in Alameda County ranked 6th.

Dublin and Milpitas were the only two California cities making the U.S. Census Bureau's list of 15 fastest growing cities, 2014-2015, but three cities - Los Angeles, San Diego and San Francisco – ranked among the nation's top 15 with the largest numeric increases:

Irvine's Continued Growth not a Surprise

Year after year we see reports of Irvine's increase in population. A 2012 article in the Orange County Business Journal says “Irvine won't max out for decades.”

At that time, city officials projected Irvine's population would grow to 256,300 by 2020. However, the California Department of Finance's recently released New State Population Report shows Irvine's population had already reached an estimated 258,386 by January 2016.

Why are People Moving to Irvine CA?

Through the years, the city of Irvine has consistently ranked as one of the Best Places to Live, including by Livability. Some people say they move to Irvine for the city's highly rated schools and its cultural diversity. Irvine is recognized as an international crossroads city, and education is a priority for its residents. More than 90 percent of high school graduates attend college, with students performing well above state and national comparisons.

Many people move to Irvine because, according to a report on The Safest Cities in California in 2016, it is one of the state's largest safe cities. For more than a decade Irvine held its status as one of the safest cities in the country based on FBI violent crime statistics.

For various reasons, a growing number of people are moving to Irvine. That growth is not expected to slow anytime soon. text goes here

How Chipman Relocation & Logistics Can Help

Whether you're looking to move from city to city or state to state, Chipman offers a unique and personalized moving service. Our expert staff of relocators, movers, and drivers will handle all your packing, moving, deconstruction, and reconstruction from start to finish. To find out more about what all we can do to help for your next move, explore our services below!.

We provide moving and logistics services to the entire LA, Orange County area. Whether you’re moving locally, to another state, or internationally, We are here to help.

Get your free quote today for your residential move with Chipman Relocation & Logistics. Learn more here!

Take the first step of your journey.